Want to do better on exams? Here's how to combat stress

Stress impairs memory – but there's one things students can do to offset its effects.

It is well known that stress can impair memory. Everyone has had some experience of this kind. As a student suffering test anxiety, grades are likely to suffer. In high-stakes social or business interactions, the stress may well cause memory to fail us, such as when we forget a friend’s name in the process of making a social introduction. How does stress do this? Is there anything we can do about it?

First, we need to know what stressful events do to the body and brain. Brain freezes probably occur because thinking can get so preoccupied with the stress-inducing stimuli that other thoughts cannot emerge. But other kinds of stress-induced memory impaired come from the well-known “fight or flight” response in which stress activates the release of adrenalin into the blood stream. Adrenalin has many bodily effects that support fight or flight, such as raising heart rate and blood pressure, and increasing arousal perhaps to the point of anxiety and fear. The increased attentiveness may have a fleeting beneficial effect on memory, as has been demonstrated in laboratory experiments. But the other effects of adrenalin on anxiety and distress are likely to impair memory.

The other thing that happens during stress is the activation of the anterior pituitary gland’s release of ACTH, which in turn activates another part of the adrenal gland to dump cortisol into the blood stream. In the short term, cortisol can have many beneficial effects for combatting stress, such as mobilizing white blood cells and enhancing the immune system. But cortisol binds to cells in the brain’s hippocampus, the area that converts new experiences into memory. This binding actually disrupts the memory-forming process. Ultimately, if stress continues, the synaptic regions deteriorate, making the impairment permanent.

The effects of both adrenalin and cortisol were revealed in an interesting study of mild social stress. Here, the focus was on a theory of how stress effects on memory might be thwarted by a learning technique called forced retrieval. Prior research with students, had shown, that the usual study technique of re-reading notes or text is not nearly as effective as requiring the learner to actively retrieve the information, as one might do, with flash cards, for example. Just a few months ago, I posted a blog on this forced retrieval phenomenon as a key element in “strategic studying.”

This new research was aimed at testing the possibility that forced retrieval might protect learners from the memory deficits caused by stress. In the study on the first day, 120 subjects studied a list of 30 nouns or images of nouns one at a time. Then, one half of the group restudied the items while the other half practiced retrieval by recalling as many items as they could (but without feedback telling them if they got it right). One the next day, half of each group were stressed by being required to solve hard math problems and by giving speeches in front of two judges and three peers. Then they were tested. Twenty minutes later they took a second test on items that had not been tested on the first test. The results revealed that retrieval practice yielded better results. 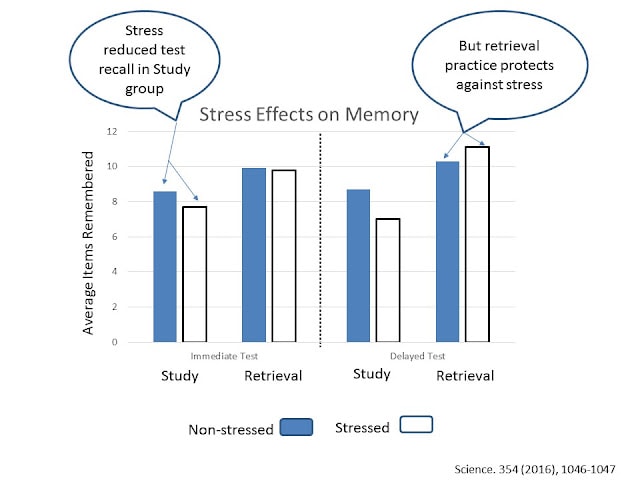 The effects of stress on memory

To explain why forced retrieval works, the authors speculate that it provides better initial encoding. That is, the new information is registered more strongly if you make yourself try to retrieve it. This is consistent with the everyday experience that most of us have had wherein information that strongly grabs our attention is more likely to be remembered. Forced retrieval is a way to make ourselves pay better attention to what we are trying to lean.

A version of this article original appeared on Bill's blog, Improve Your Learning and Memory.

Specialize in communicating learning and memory research. Operate a blog for Psychology Today and my own (thankyoubrain.blogspot.com), with nearly 2 million reader views. Author of "Memory Power 101," "Better Grades, Less Effort," and "Teach Your Kids How to Learn" (in press).
Follow

Blocking COVID-19 from entering the brain

Gabrielle Ahern
Podcast: Pay attention! How your brain decides what to focus on
Contributor
Brain