Humour is a psychological construct that encompasses a range of different perspectives. Incongruity theory, for example, proposes that it may derive from surprise, or from the identification of apparent inconsistencies in what is heard or seen (Veale, 2004). These inconsistencies can generate momentary epistemological difficulty and cognitive impasse, and Marteinson (2006) asserts it is recognition of this predicament that generates laughter. Alternatively, Martin’s (2007) Superiority Theory has its roots in the teaching of Aristotle (McKeon, 1941), Hobbes (1651) and Freud (1960), all of whom suggest we are often driven by malicious intent, because we humans all too frequently derive enjoyment from putting others down. Unfortunately, research appears to confirm that much negative or aggressive humour has a misanthropic edge (Sondergaard, 2017) and that satire, sarcasm and “putdowns” may be driven by a need to assert personal superiority. In Arousal Theory, Berlyne (1972) applied psychological perspectives to Kant and Spencer’s (1860) contention that laughter was an expression of repressed strain. He postulated a dual mechanism – an arousal boost being a pleasurable affective response to stimuli and an arousal jag being the discomfort caused by inappropriate but potentially humorous stimuli. In combination, this may ultimately settle into nervous or guilty laughter. Laughter is thus sometimes a homeostatic mechanism designed to reduce tension.

Even this basic consideration of theoretical perspectives makes it apparent that humour can be functionally either positive or negative and can create either a positive or negative affect in the individual. It is therefore useful to distinguish between what helps and what hinders learning. Appropriate humour is that which is affiliative in nature (Martin et al, 2003) and promotes in-grouping and social cohesion through shared enjoyment. During classroom activities it may serve to capture attention, increase engagement, heighten motivation (Bakar & Kumar, 2019) and thus aid learning. In difficult circumstance it may usefully alleviate tension or soften criticism (Mottet et al, 2006). Hence, appropriate stories, jokes or observations may help regulate emotion during times of academic stress (Miczo, 2004) or help students grasp particularly difficult concepts (Masek et al, 2018). Inappropriate humour is that which is aggressive, denigrating, offensive, rooted in bigotry and animosity or intended to wound. It may involve staff capitalising on power inequalities or may be used in order to subjugate and control (Mesmer-Magnus et al, 2018). Such negative humour can result in out-grouping, ridicule and derision (Jeder, 2014) – with students sometimes turning against one another and sometimes turning against the lecturer (Torok et al, 2016).

Student’s perceived and actual learning are significantly related to their view of the lecturers “good will” towards them (Teven & McCroskey, 2009). Students therefore learn better from lecturers who foster positive relationships (Nesi, 2012), are more likely to report liking lecturers who use affiliative humour and consistently rate it as one of the most desirable qualities in a lecturer (Fortson & Brown, 1998). This may, however, be related to other underlying personality dimensions. For instance, maladaptive humour (i.e. that which is used to harm or demean) is positively correlated with neuroticism. Aggressive and self-defeating humour is positively correlated with depression, anxiety and hostility. Conversely, prosocial and positive humour is correlated with psychological well-being and adaptive social behaviour. The use of inappropriate humour may therefore be just one manifestation of maladaptation, social dysfunction or mental illness, whilst appropriate humour is one of the marks of well-balanced and socially competent individuals. It is also notable that male lecturers are generally regarded by students as being funnier than their female counterparts (Sev’er & Ungar, 1997), suggesting student responses may be shaped by more than this single facet of teaching technique (Martin et al, 2003).

The use of appropriate humour in the classroom is, however, positively related to student’s perceptions of the classroom environment as being pleasant and work being enjoyable (Torok et al, 2016). Lecturers who use humour are better liked by students and subsequently have greater authority and social influence. This serves to suppress undesirable behaviour, create a more cohesive group dynamic (Provine, 2000) and a more relaxed, positive atmosphere. Classroom learning environments that are perceived to be highly personalised and encouraging of active participation are significantly related to deep level learning (Matsushita, 2017). The wise use of humour therefore has a qualitative impact on student understanding. Furthermore, if staff demonstrate a willingness to laugh at their own mistakes, it serves to reduce tension and anxiety, leading to greater “risk taking” and more creative approaches to learning by students (Bryant & Zillmann, 1989). This personalisation and high-level engagement is further linked to deep-level processing. However, lecturers should be aware that the reduction in formality may cause cultural confusion for some students who may find departure from socially stratified norms stressful (Wang, 2014).

Although the results of research into the relationship between humour and information recall are mixed (Banas et al, 2010), Wanzer’s (2010) Instructional Humour Processing Theory goes some way to explaining these inconsistencies, and clarifying the link between appropriate humour and student learning. Drawing on aspects of Disposition Theory (Zillman & Cantor, 1972) and Incongruity-Resolution Theory (Hildebrand & Smith, 2014), Wanzer proposes that a state of cognitive equilibrium and low arousal (such as would arise from passive reading or exposure to basic facts) results in shallow learning. Challenge and moderate confusion jolt students out of passivity and the desire for equilibrium promotes active engagement and attention (Nawaz et al, 2020). If the confusion is negative, it will precipitate a negative affective state followed by disengagement (Falout et al, 2009). As improved attention facilitates detailed encoding (Dunne & Opitz, 2020), positive confusion such as would be created by unexpected humour, creates a positive affective state (Graziano & Bryant, 1998) which is linked to deep learning (D’Mello & Graesser, 2012). This elaborative encoding subsequently aids retention and recall (Baddeley et al, 2016) and the experience of success increases motivation and drives future attentional resources. Emotional Response Theory (Mottet et al, 2006) complements this position by suggesting that lecturer communications trigger an emotional response in students which fosters approach or avoidance in both the short- and the long-term. A positive emotional experience within the classroom thus has the potential to shape student perceptions of the module, the programme and learning as an entity. Emotion is only truly experienced, however, in situations that are of importance to the individual. In order for lecturer humour to be emotionally experienced by the learner, it therefore needs to have relevance to either the student or the topic (Frymier et al, 2008; Kaplan & Pascoe, 1977).

It is clear that humour has the potential to positively impact many aspects of a student’s experience and learning, if it is wisely and appropriately used. But it needs to be Positive or Affiliative in order to create positive affect and must be relevant in order to make the material memorable. We have all no doubt had that one lecturer who is not only a genius in their field but also has the entire lecture theatre in fits of laughter. Research (though dated), suggests that use of humour increases as lecturers become more experienced in their craft, but diminishes as the semester draws to a close. Sadly, it also indicates that, compared to lecturer’s self-reports, students record far less instances of lecturers having made humorous remarks (Gorham & Christophel, 1990). So for the sake of our students, we need to think twice before attempting humour, because there is a possibility that we are not actually as hilarious as we think we are!

Bakar, F., & Kumar, V. (2019). The use of humour in teaching and learning in higher education: Lecturers’ perspectives. Journal of English for academic purposes. 40, 15-25

Gorham, J. & Christophel, D.M. (1990). The relationship of teachers’ use of humour in the classroom to immediacy and student learning. Communication Education, 39, 46-62.

Marteinson, P.G. (2006). On the problem of the comic: A philosophical study on the origins of laughter. Ottawa, Legas.

Martin, R. A. (2007). The psychology of humour: An integrative approach. Amsterdam: Elsevier.

Wang, Y. (2014). Humour in British academics lectures and Chinese students’ perceptions of it. Journal of Pragmatics, 68, 80-93 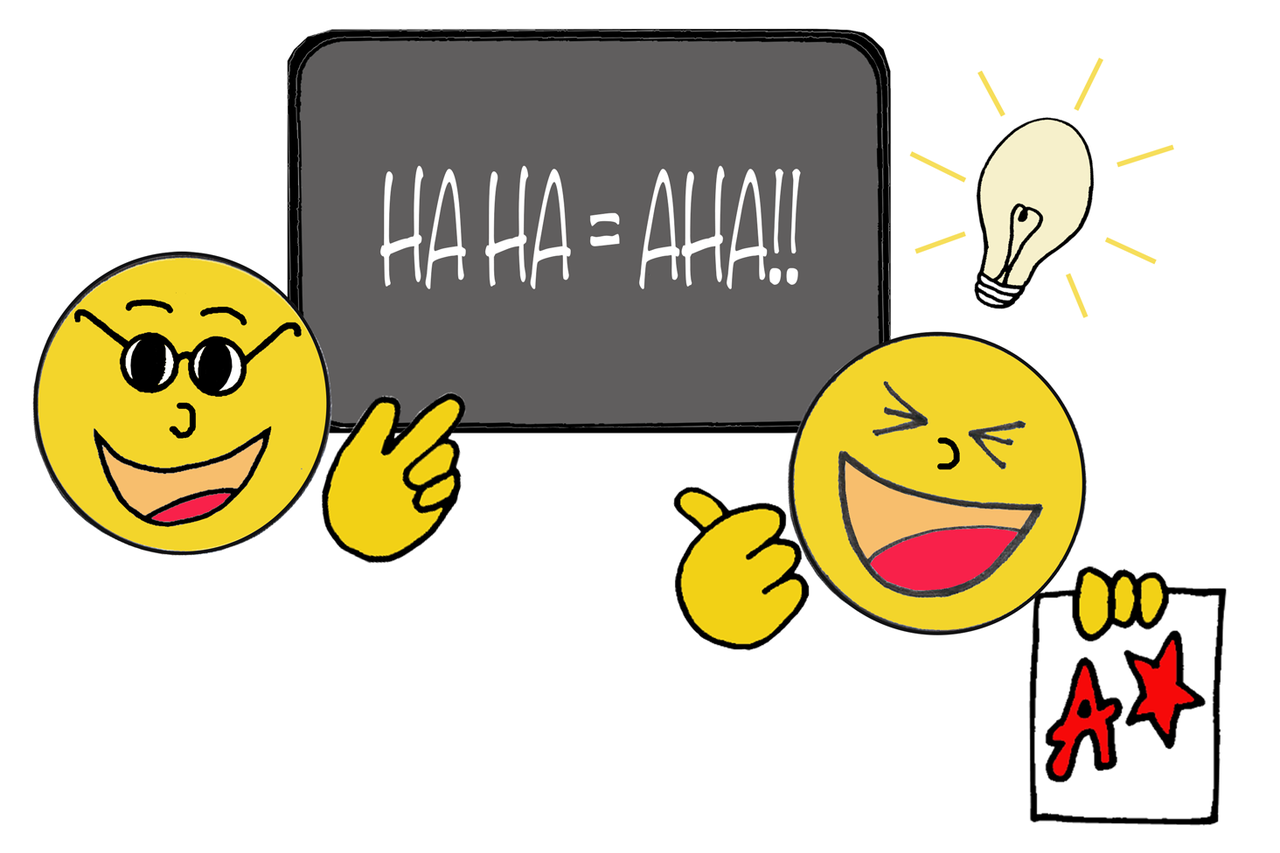